Every year, the "Heimspiel" series at the Braunschweig International Film Festival (BIFF) presents a wide range of films that originated in the region. This year, the Heimspiel award comes with prize money of 2,500 euros - four creative agencies from the Lion City have joined forces for the new, significantly higher prize money.

The Berlin-based production team always has a case of Wolters in the fridge - the reason is obvious: their roots are in Braunschweig. All the productions that always enter the race for the Heimspiel prize have a connection to the region: having grown up here, having anchored themselves here with their studies or family, or having found their way to the Lion City or the surrounding area over the course of time. Also firmly rooted here are the four agencies eventives GmbH, Kreativrausch GmbH, wehyve GmbH and Call The Dude GmbH. The companies from the creative industries have joined forces in a joint effort to sponsor the Heimspiel Award. For them, the commitment is a matter of the heart.

"We may be on the road a lot - but Braunschweig is our hub. This is where we live. This is where we work. And this is where we get involved. And of course it's super nice to see that so many great films have been made that originated here," explains Babak Khosrawi-Rad, managing director of the live communications agency eventives. Khosrawi-Rad's team is co-initiating the HEX Future Festival, "we've already made joint plans for that, too." Speaking of joint plans. Kreativrausch managing director Laura Wittig adds: "As a specialized social media agency, collaboration and cooperation with other agencies plays an elementary role for us. Only in alliance can we provide brands with the best possible strategic support."

And this alliance has now formed for the Heimspiel Award. "Especially in times of digitalization and after more than two years of the pandemic, we need more real encounters again. Encounters in virtual space are good and important for many topics, but nothing replaces a real conversation from person to person. For this reason, we think it's great that the festival is creating space for these analog encounters," says Wittig. "Even though I'm an absolute advocate of digital communication, no Microsoft product can replace a real conversation over a beer - no matter how good it is," confirms Jonathan Beddig, partner and head of the agency business at wehyve.

An exclamation mark for local anchoring

"The community action for this sponsorship is really great fun," explains Falk-Martin Drescher, managing director of the PR and influencer agency Call The Dude. "We all benefit from a livable region with exciting cultural events and projects. And it's nice that we can actively contribute to it through such channels." The cooperation started this year with four agencies - meanwhile, the partners* involved have already started thinking together about connecting ideas. "There is plenty of potential," adds Wittig. Meanwhile, the Filmfest-Verein is pleased with the agencies' commitment to the Heimspiel Prize. "In recent years, the Heimspiel series has produced many impressive productions with a regional connection by exciting filmmakers*. This series is an exclamation mark for our solidarity: we are an international festival, but our roots are here," says CEO Thorsten Rinke. 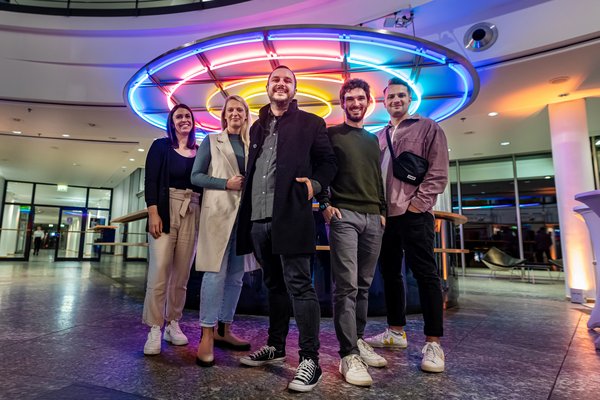