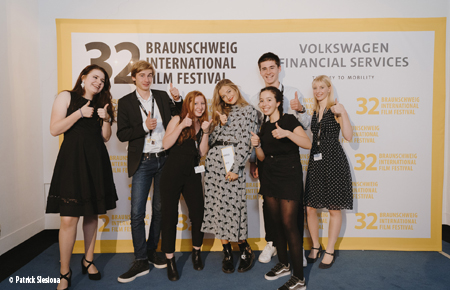 The German-French youth prize KINEMA is being awarded for the 13th time already. Together with the Lower Saxony school cinema project Kinema and the German-French Youth Organisation, the Festival developed a concept that allows young people from both countries to take an active part in an international festival. A six-member jury made up of young French and German people, aged between 16 and 21, will select a prize-winner from amongst six debut or second films. The German director Gordian Maugg will advise the jury during their bilingual discussions and decisions. Among the German-speaking competition films DER BÜEZER comes from Switzerland, ALL I NEVER WANTED and MEIN ENDE. DEIN ANFANG (MY END. YOUR BEGINNING) are from Germany; the French-speaking A CLEVER CROOK and LES MISÉRABLES come from France and A BROTHER’S LOVE is a production from Canada. The KINEMA youth prize is supported by the State of Lower Saxony, the German-French Youth Organisation, the Académie de Rouen in Normandy, the Friedrich-Walz-Foundation, the Antenne Métropole of the metropolitan region of Hannover Göttingen Wolfsburg and the Institut Français from Bremen.